The talk of “Trade War” is everywhere in the financial media, as you’ve no doubt seen — the first round of “tit for tat” trade tariffs has been decided on both sides, with the US planning tariffs against Chinese steel and aluminum and the Chinese retaliating with tariffs on a variety of mostly agricultural products from the US… and no one knows how far it will go, or whether this will just end up being negotiating bluster on both sides that eases once some real negotiations take place.

But certainly it causes a lot of fear, the stock market does not like tariffs and it does not like to go to bed on Friday night wondering what the Twitterer-in-Chief is going to say next… and the market was already richly valued and worrisome when we started this year, so big moves up and down have followed each round of the bluster-and-response game.

And Steve Sjuggerud, it appears, has some way of profiting from this “Trade War” — and he’s hinting at that “favorite way to profit” in the latest ads for his True Wealth China Opportunities letter (currently $2,000 for life, no refunds… $149/year “maintenance fee”).

What is this way of benefitting? Well, it seems like… the same thing it has been over the year or two he’s been promoting this service and his China-related stock picks. The only thing that has changed, really, is that the big Chinese tech stocks who make up the majority of his recommendations (or so it seems, at least) are down sharply, in many cases 15-20%, from the peak prices we saw in late January and late March.

The reasoning seems to be that these stocks are down due to the “trade war” talk, but they are not actually directly touched by tariffs or US-China trade. Every major company is indirectly impacted by global trade, of course, since it plays a major role in economic growth in general, but at least most of these stocks won’t be reporting tariff charges on their income statements.

Here’s a taste of the ad:

“My Favorite Way to Profit from Trump’s ‘Trade War’

“A Rare Second Chance to Get In On Steve’s Favorite Government-Sheltered Investment….

‘There’s a HUGE side of this story most people don’t understand. It’s not being told by the mainstream press – or reported widely in the financial world. But if you understand what’s likely to happen next, it could change your life.'”

This story was initially touted back in 2016 as a way of buying the Chinese equivalent of the “FANG” stocks — and the rationale was mostly that the growth potential was as good or better than the global FANG stocks (Facebook, Amazon, Alphabet, etc.), but Chinese regulations meant that these firms were spared competition. Amazon and Alphabet wouldn’t be storming across the “Great Firewall” to take share from Alibaba and Baidu, for example, so growth should be tremendous as they continue to expand and thrive in the rapidly expanding Chinese economy.

And it worked quite well, as you’ve probably noticed — those stocks were probably not all recommended by Sjuggerud on just that one day in September 2016 when we covered his earlier ad, but if we go by that date here’s the chart of the stocks we identified in that earlier pitch: 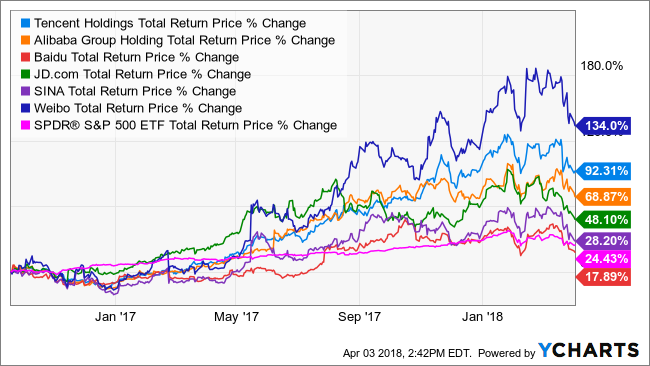 So among Tencent (the Chinese Facebook… or really the “Chinese everything”), Alibaba (Chinese Amazon), Baidu (Chinese Google), JD.com (also Chinese Amazon), Sina (Chinese Yahoo, owns much of Weibo), and Weibo (Chinese Twitter), only Baidu has done worse than the S&P 500 over the past year and a half since that article was written. Those comparisons to US companies are, of course, not very accurate — all of these firms are far more complex than their two-word description — but they give a general idea.

And it does make you think about just how important it is that China essentially held off the big US multinationals and nurtured their own competing internet companies. Other large tech companies have survived and thrived despite that global hegemony by the mighty few, of course, but you can probably count the other non-Chinese countries have their own “Google” or “Amazon” on one hand (Latin America’s MercadoLibre, Russia’s Yandex, etc.).

Incidentally, here’s what that chart looks like with the rough US corollaries — I threw Activision Blizzard and Netflix in with the US bunch, since gaming and video play a big role in a lot of the larger Chinese tech companies: 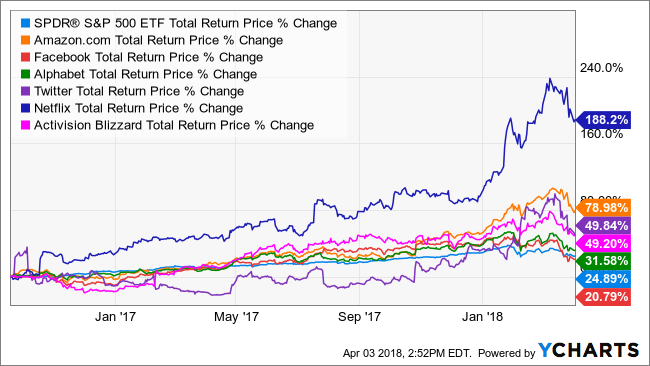 So yes, the Chinese stocks still win… but it’s pretty close, and “giant tech stocks” in general have certainly been a winning bet for the past year and a half. Until, of course, the February dip or the late March dip came along and created what Sjuggerud seems to be calling a “buying opportunity.”

So yes, though we’re not told to rush out and buy one big winner from Sjuggerud, he has repeatedly hinted at Tencent as his favorite in this bunch, and that’s still on the list here… as is Ctrip (CTRP), which didn’t come up in my previous article about his ad (Ctrip was an earlier strong performer, up 2,000% in 15 years and touted by pundits for years before Alibaba was even publicly traded, part of the first generation of Chinese tech stocks that took off in the mid-2000s along with Sina and Baidu, but the stock has been more or less flat for the past two years).

And… that’s about all we get by way of hints, so all we can really tell you is that Sjuggerud seems to still like most of his China tech stocks and similar investments (he has also recently touted MercadoLibre (MELI) as the “next Tencent” for his True Wealth newsletter, and that stock has dipped, too… though I don’t know if that South American company would make it into a China newsletter).

He doesn’t drop any other hints about the specific companies, but here are the ones we know that he has liked in the past — none would have triggered a 25% stop loss over the past couple years other than Ctrip, which would have stopped out using that criteria back in December:

He has also, over the past year or so, teased some other recommendations as plays on the increasing weight Chinese domestic shares (“A” shares) will have in global indexes, including the KraneShares ETFs KWEB (Chinese tech stocks) and KBA (China A shares)… I don’t know if those are currently in his portfolio, they’re not hinted at in this latest ad.

And yes, all those stocks are down from their January highs and/or their March highs, with drops of anywhere from 5 percent to 20 percent from those recent highs, after a couple years of mostly extremely strong performance.

Does that make them buys? Well, if they’re going down because of tariff fears… yes. If they’re going down because everyone’s worried that they were overvalued and in bubble territory and that China’s growth might slow down and provide a bit of a headwind… maybe not. Nothing is ever perfectly clear or simple, but they are, at least, cheaper than they were a few weeks ago.

For what it’s worth, (and for disclosure purposes) I’ve traded several of these in the past but currently have just long-term option positions on Alibaba and JD.com, and an indirect position in Tencent through the South African fi