Fool’s “An obscure Canadian company is taking over Silicon Valley, one device at a time.”

Motley Fool Canada says "we think they could become as big… or even BIGGER than Shopify." What's the story?

Today we cast our gaze to the Great White North — a pitch about a small-cap Canadian cybersecurity stock has sent a few questions my way, so it’s time for the Thinkolator to convert to metric and get us some answers for this Motley Fool teaser.

That’s always the dream, no? Motley Fool Canada and the US-based Motley Fool Rule Breakers were both early to the Shopify (SHOP) story… and yes, we covered that tease way back when as well (and thankfully bought a few shares), and with a 3,700% return it’s one of the best performers on the tracking spreadsheets — so even though we know hitting a home run a couple years ago doesn’t mean anything about the current time at bat, we’re intrigued.

What’s the promise this time? Here’s a little bit of the spiel, which came in via email this morning:

“One Killer Stock For The Cybersecurity Surge

“An obscure Canadian company is taking over Silicon Valley, one device at a time.

“Even Under Armour has enlisted them to protect their intellectual property.

“And if you’re reading this on a laptop, tablet, or smartphone—their unique ‘self-repairing’ technology might already be inside your device!”

What else are we told about this “self-repairing technology?” They say it’s “ready for activation” in 500 million devices, and that it is somehow pre-installed on most new laptops… so that creates a big potential market. What else?

We’re told they have 140 patents protecting their “self-repairing” technology.

And the product is sold on some sort of subscription model, which is what all investors want to hear — they say it “guarantees 1 to 5 years of recurring revenue” per sale.

One more bit from the ad:

“If this company’s technology is enabled on only 10-20% of devices, our analysts are convinced they will be “massively successful.”

“And if they go far above and beyond that?

“Well…they could become the next famous Canadian success story.

“In fact, we think they could become as big… or even BIGGER than Shopify.”

So yes, that’s a tall order — hard as it is to believe, Shopify is now a $140 billion company… but where do those clues send us?

Thinkolator sez this is… Absolute Software (ABST in both NY and Toronto).

And yes, I confess that I had never heard of this one before five minutes ago. Here’s how they describe themselves:

“Absolute Software is a leader in Endpoint Resilience solutions and the industry’s only undeletable defense platform embedded in over a half-billion devices. Enabling a permanent digital tether between the endpoint and the enterprise who distributed it, Absolute empowers IT and Security organizations with complete visibility, control, and Self-Healing Endpoint security.”

They have been reporting steady growth in the past couple years… but nowhere near the high-end sexy levels of a lot of technology companies. Here’s the five-year chart of trailing revenue growth for Absolute and Shopify, just to give some perspective — that’s SHOP in orange, ABST in blue: 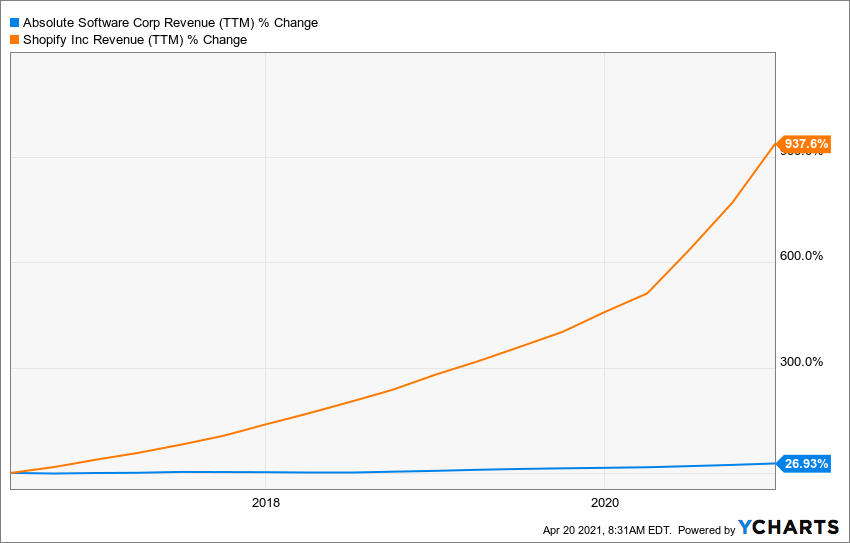 So that’s what raises my eyebrows a little bit — this is a that provides endpoint security, securing all the devices of a company… and yet, in the year when just about every single employee went remote and created a whole new world of headaches for IT managers when it comes to managing all those laptops, their revenue was up by only 14% and their income actually dropped. So what’s going on?

Well, it is a Cloud/SaaS stock, which investors tend to love — recurring revenue is more appealing than one-time sales, but the fact that they’ve been publicly traded for 20 years but still trade at about 5X sales and pay a decent dividend tells us that this is a different kind of company than the current cloud darlings (yes, like Shopify). They’re fairly steady and have been generating gr