Fool’s “The Tesla of Canada is Here” Pitch

Is there a secret electric vehicle leader hiding in the Great White North? What’s up with this latest teaser pitch from Motley Fool Canada about an “under-the-radar Canadian disruptor?”

Let’s check it out, shall we?

The ad is for the Motley Fool’s Stock Advisor Canada service (offered at C$99/yr), which is the Canadian version of the “flagship” US Stock Advisor newsletter — it has generally advertised itself as offering one Canadian and one US stock each month, with lots of overlap with its sister publications in the US. This is what they’re promising:

“This little-known Canadian company is on the cutting edge of electric vehicles… self-driving technology… artificial intelligence… robotics… and management expects to see sales grow by roughly 140% in the next 4 years… adding upwards of $10 BILLION dollars to the top line!”

And they make the comparison to Tesla (TSLA), which is no real surprise — if you compare pretty much any company that’s at all involved in the auto industry to Tesla, it will look tiny and undervalued…. Tesla is a cultural and speculative phenomenon led by a polarizing and charismatic leader, you can’t really slot it in with other car companies and expect the comparison to make any sense, but everybody does — from the ad:

“But the cold hard truth about Tesla is that it makes a mere fraction of the vehicles of its more established rivals.

“In fact, there’s a dark horse Canadian company that has produced 3 TIMES the number of vehicles as Tesla…

“Yet its stock trades for roughly 25x LESS!”

We also get some juicy rumors, and the “this company is so obscure you need us to tell you about it” language…

“To top it off, this Canadian dynamo is even rumored to be working on Apple’s top-secret ‘Apple Car.’

“Yet despite all of that… you’ve probably never even heard of this company!”

So what is this stock that Motley Fool Canada think swill be one of the best growth stocks for this year (and beyond)? They say they’ve just issued a “strong BUY” recommendation (the ad is dated April 23), that it’s less than 5% of Tesla’s size, and that “this could be your second chance at Tesla-like returns.” Is that enough?

Indeed, and it may well be that it’s got a “strong buy” recommendation now from Motley Fool Stock Advisor Canada, but we should also note that they also pitched this same stock about six years ago, Thinkolator sez this is another tease for the giant Canadian auto parts supplier and auto manufacturing outsourcing firm Magna International (MGA, MG.TO).

How does Magna match our clues? Well, it has, of course, long been rumored as an Apple partner for the sometimes-believable Apple Car daydreams… and maybe those rumors have a little more substance now than they did five years ago.

Magna is roughly 1/25th the size of Tesla, though that number shifts around a lot (Tesla’s market cap has been at both $550 billion and $900 billion in just the past few months — right now, it’s around $700 billion, 23X the $30 billion market cap at Magna).

And yes, Magna is an important player in the global auto industry, with a long history and a fairly unique position among suppliers… this is from their website:

“Our deep roots in the auto industry go back to 1957, when we began working with General Motors. Today, we make everything from seats to powertrains and are the only auto supplier to build complete vehicles.

“We are at the forefront of a new technological revolution in the automotive industry, and we’re leading the way in all areas of future mobility, with a keen focus on electrification and autonomy.

“We are a leading global automotive supplier dedicated to delivering new mobility solutions and technology that will change the world. Our products can be found on most vehicles today and come from 342 manufacturing operations and 91 product development, engineering and sales centers in 27 countries. We have over 158,000 employees focused on delivering superior value to our customers through innovative processes and world-class manufacturing.”

That’s really where the “Apple Car” rumors started, in fact — with the fact that Magna is one of the largest auto suppliers in the world, and is pretty much the only automotive supplier that offers full outsourcing and the opportunity to build a car without building an auto assembly plant (they’ve been making complete vehicles, without a brand of their own, for more than 20 years). Not unlike FoxConn assembling Apple’s iPhones, I guess — this isn’t a revolutionary manufacturing idea, though it is still unusual in the auto industry, where final assembly is jealously guarded by brand owners.

Magna International shares have enjoyed a strong run over the past six months as interest in that sector has surged, partly thanks to electric vehicle excitement and partly thanks to stimulus and the pandemic-driven suburban flight and collapse of public transit usage. We should note that this has impacted all the companies you can probably imagine in the sector, not just the sexier EV names, here’s a chart for a bunch of these names over the past year, Magna is currently the best of the “real company” non-Tesla names that come to mind (I’m not counting all the LiDAR stocks or EV startups that don’t have revenue yet, and I’m sure I’ve left out some other suppliers as well): 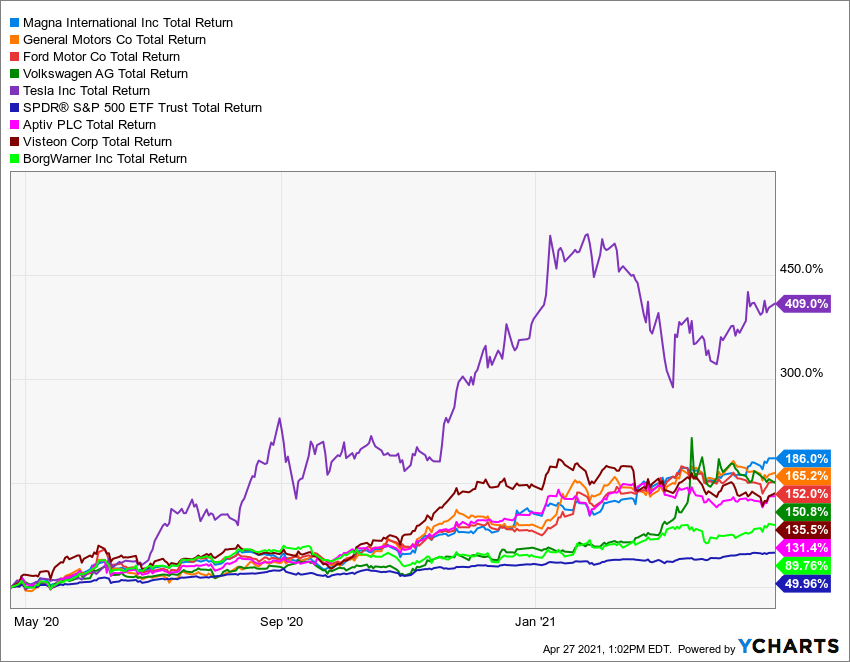