Who's Jason Stutman hinting at as "perfectly positioned to come out as the winner in the battle over Bitcoin?"

Jason Stutman is peddling his Technology & Opportunity letter ($99/yr) with a new tease about blockchain, so I thought it would be good to take a look at that after we sniffed around in Paul Mampilly’s (older) blockchain tease yesterday.

The spiel is all about an “arms race” in bitcoin mining that will be spurred by the “halving” that is coming in May, but the tease is not to buy bitcoin or any of the various altcoins, it’s all about buying the “picks and shovels” beneficiary — the seller of arms into this “arms race.”

Here’s a bit from near the top of the ad:

“You Don’t Have to Buy Bitcoin, Ethereum, or Any Altcoin

“How to get started today with as little as $5….

“And you don’t need a crypto wallet or anything complicated like that. A simple brokerage account is sufficient to reap such extraordinary gains.”

So what’s the story? Stutman says that we’re headed into a “bitcoin supply shock” that will drive prices higher… and that the “halving” that’s coded into the bitcoin system will further pressure bitcoin miners, making them invest in the best equipment so they can still be profitable despite the lower returns from mining.

What is “halving?” That’s just the gradual decrease in the creation of new bitcoin that is written into the code — roughly every four years, the reward for bitcoin mining gets cut in half and the creation of new bitcoin gradually slows, eventually ending with the total maximum bitcoin issuance that they estimate will be hit in 100 years or so. There’s a pretty good explanation here at bitcoinblockhalf.com if you’re curious. The original idea of bitcoin was to create an inflation-resistant currency, and this gradual reduction in new issuance was designed to help support the price of bitcoin (of course, whether the design works or not depends on human behavior… which is a lot less predictable, and bitcoin’s code can be altered by consensus, which is probably unlikely but certainly not impossible). The next halving date is expected to be around May 13 at this point, but it depends on actual activity on the network so could shift a little.

That does not mean the current supply of bitcoins will be cut in half, to be clear, just that the rate of creation of new bitcoin by mining will be reduced by half. Which means that mining will become much less rewarding, since you’ll have to expend twice as much computing power to earn the same reward (assuming, of course, that bitcoin prices stay the same). That is deflationary, slowing the increase of new bitcoin, but whether it’s enough to drive the price of bitcoin higher in the short term is an open question — pricing is not just about supply, it’s also about demand.

But we’re working with the assumptions from the ad here, so what is the company that Stutman thinks will make us rich as bitcoin surges higher? Here are some clues…

“Its founder and CEO invented the world’s first dedicated Bitcoin mining tech while pursuing his Ph.D. in electrical engineering.

“But he’s not just a genius inventor; he’s a gifted entrepreneur as well… That’s a rare combination to come by.

“After seeing how successful his early machines were, he decided to go all in and found the company I’m talking about. That’s when he brought the very first ASIC rigs to the market that are now hugely popular with Bitcoin miners.”

And apparently this company has been an innovation leader, per the ad:

“… this manufacturer keeps shocking the market with one innovation after another…

“It was one of the first to reveal a 7-nanometer mining chip before most competitors even announced the use of such semiconductors.

“The result? Its 2019 product line was five times faster than predecessors.

“Recently, this company escalated the arms race even further by uncovering machines with 5-nanometer chips.”

The ad tells us that the company should be soaring, too, with huge demand for their products:

“Its rigs belong to the fastest and most energy efficient machines out there.

“Bitcoin miners will do anything to get their hands on them, otherwise the halving event will kill their business.”

And apparently the company has been able to attract a lot of capital, even when things aren’t going well — more from the ad:

“Back then, mining hardware manufacturers suffered badly. The whole industry seemed to be dead…

“But that didn’t stop this young company from successfully completing a round of financing worth hundreds of millions of dollars in March 2019.

“It received a valuation in the billions of dollars following that pre-IPO funding round.”

And we’re told that it has now gone public, so us “average Americans” can participate.

And apparently this company is exposed to more than just bitcoin mining, too, as Stutman thinks they’ll become a “superstar” in the blockchain industry in general, with companies everywhere exploring the use of blockchain for supply chains and financial tracking.

But the reason the ad teases this is a hot opportunity right now, on top of the “halving” date for bitcoin, is that Stutman sees three catalysts…

The first is the “global turmoil” that he thinks will send people to bitcoin as a “safe haven”, he calls it the “gold of the digital era.”

We can argue about that in the short term, for sure… so far this buying bitcoin price has been awfully similar to buying a 2X-levered exposure to the Nasdaq 100 — here’s the year-to-date chart comparing bitcoin (blue), the 2X ProShares Nasdaq ETF (QLD, orange) and gold (red): 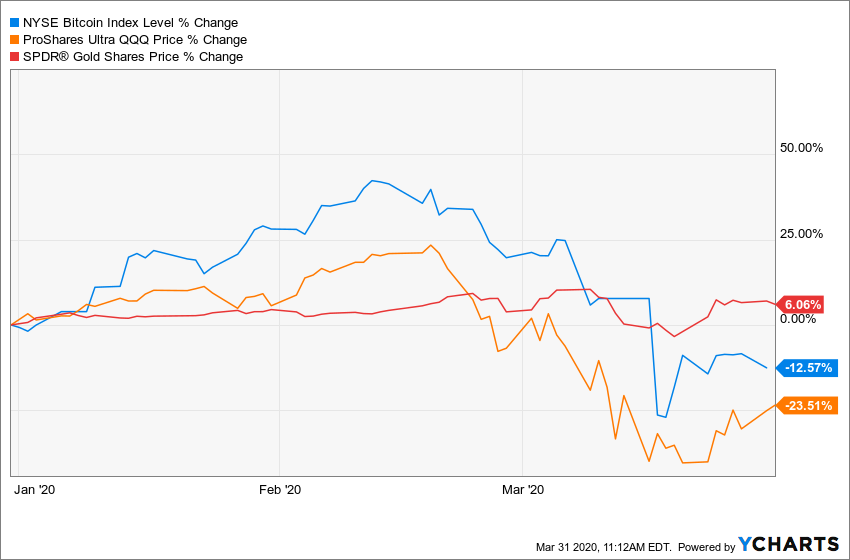 But generally, something that rises this quickly and falls this quickly doesn’t deserve the “safe haven” term in my book. A safe haven is a place you run to when you want to get away from the volatility in the market, but this is that same chart over the past three years: 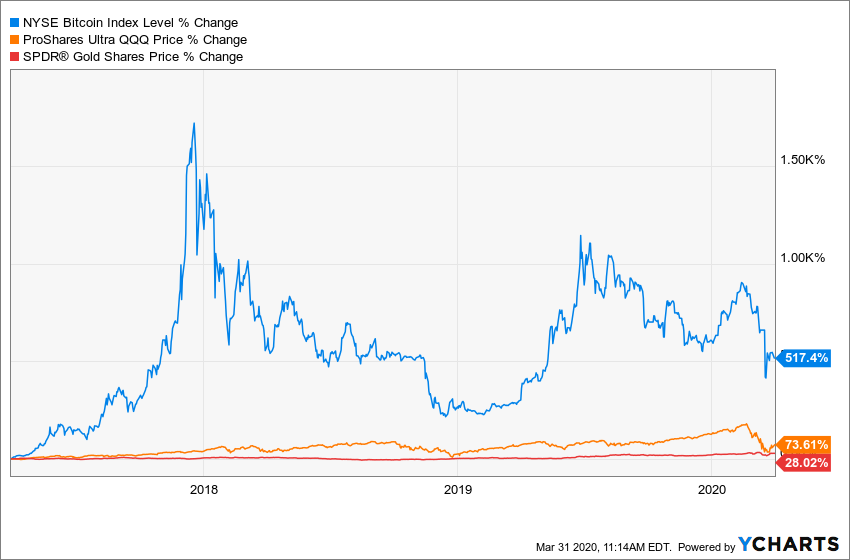 Bitcoin, at least so far, is nowhere near being “digital gold” or a “safe haven” — it’s investor