Solving Stutman’s “How to Bank 1,343% on the ‘Chip’ EVERY Electronic Device Needs” Teaser

What's being teased in ads for Technology & Opportunity?

We’ve got a new pitch from Jason Stutman’s Techology & Opportunity to take a gander at, and it’s another of those “three parters” that pitches a few different stocks as a play on a theme… so I’m going to try to be economical with the verbiage and get to all of ’em before you lose interest.

Too late? Sorry, old habits die hard. The pitch is for a tiny “chip” that is in hot demand… here’s how the ad starts:

“This Tiny “Chip” Could Render ALL Your Electronic Devices OBSOLETE

So what are these little doodads? More from the ad:

“You may never see one of these ‘chips’ in person.

“In short, the more sophisticated the device is, the more of these ‘chips’ it needs to run.”

And there’s a quote from the Wall Street Journal, since copywriters love to cite real news sources to make their idea seem like it’s got a solid backing of some kind:

“This shortage will make all electronic devices harder to come by.

‘Can’t find a Playstation 4? Blame it on a part barely bigger than a speck,’ says the Wall Street Journal.”

That Wall Street Journal article ran back in June, by the way, and used the same image as Stutman’s ad (the one with a fountain pen nib pointing at a tiny MLCC).

So yes, those “chips” that he’s referring to are multilayer ceramic capacitors — in the words of that WSJ article: “The part, which costs less than a penny apiece, helps control the flow of electricity and stores power for semiconductors, a function without which virtually no electronic device could work.”

I know nothing about these little doodads, but they sound important — and apparently the manufacture of them is a little bit of a trade secret (at least when it comes to specific “recipes” for their creation), and is dominated by a relatively small number of manufacturers.

And we’re told that supply is very tight as demand climbs, causing tightness and probably raising prices a little (though I imagine most of the big buyers lock in long-term deals), and the suppliers have been investing in expanding capacity as this shortage has gradually emerged over the past year or two. That’s what I understand from that WSJ story and from reading between the lines of Stutman’s ad, at least, can’t claim that I’d ever heard of an MLCC before this morning.

So with that backdrop, let’s dig rignt in to the pitch and see which stocks Technology & Opportunity is touting — then you can think for yourself, take a little time, and make your own decision without the pressure of a hotted-up ad promising 1,343% returns.

“This company is one of the much smaller players in this market.

“And it is aggressively ramping up its production capacity for these special ‘chips.'”

“As the company’s CEO explains, ‘We’re gearing up for a strong demand picture. What we are experiencing is not a bubble, it’s a trend. We are increasing our capacity over the next two years.'”

That sounds encouraging. Any other clues about the business or the stock?

Why yes, indeedy — we learn that it has a market cap of a little over $1.2 billion, and has been in business for more than 100 years… and recently initiated a dividend.

Enough? You betcha… the Thinkolator didn’t have to chug too much for this one, here Stutman’s hinting at … KEMET (KEM)

KEM is down a bit more still, with a market cap now of just $1 billion, and it’s not exactly “unknown” — it’s even been featured on Mad Money with the clown prince on CNBC (back in October). They are a broad-based supplier of electrical control components for chips, including those MLCC’s.

And I imagine the stock is probably being a whipsawed a bit on cyclical and trade concerns, since it’s a part of the semiconductor industry and is a play on all kinds of electronics, including auto electronics, but their numbers look pretty good. They are expanding margins as revenues rise, and they are locking in long-term supply deals with their big customers that’s helping to finance their capacity expansion.

So that sounds pretty good. And it’s positive that they announced a dividend for the first time, a quarterly nickel a share (so that should come in at a little over a 1% yield). 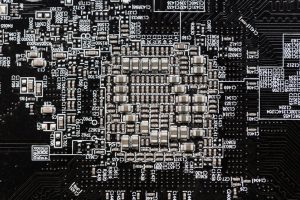 Ceramic capacitors on electronic circuit board

So… strikes me as an interesting idea, trading at about 5X current earnings (there are only a few analysts, but they expect $3.35 in the current fiscal year and $3.92 next year)… and probably worth a little more research, though at the moment it’s likely to keep being impacted by matters outside its control (broad sentiment about cyclical stocks, chip stocks, telecom equipment, auto sales, etc.) Might add this one to the watchlist as I look into it a little more.

“It’s benefiting from strong demand not only for these special ‘chips’ but also for nearly all of its electrical components.”

And he drops a CEO quote on this one as well:

“We have no reason to believe that the high demand will come down. There are shortages for so many products, for product lines which we produce, that I cannot see a point in time that backlogs will normalize, which are at record levels. But that doesn’t mean that we will see a reduction in sales, because, at the moment, the backlog is simply so high.”

And he says that they’re “seeing robust growth across the board, in industrial segments like robotics, lighting, and even medical equipment.”

Enough? Indeed, Thinkolator sez that this tease is for Vishay Intertechnology (VSH). That quote from the CEO (Gerald Paul) that Stutman cites was from the second quarter, and by the third quarter he had become a bit more moderated in his comments while adding some language about cost cutting and reduced (though still very large) backlogs.

VSH has also been around a long time, pays a dividend (almost 2% in their case), and is a little larger, with a business that’s a bit more diverse — one of the slides in their Q3 investor presentation, which I’ll copy here for you, indicates that they do a little bit of everything: 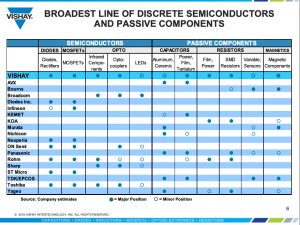 So maybe that wide array of products is why the stock has been less volatile than KEMET’s. Interesting company, perhaps not as likely to give you a jolt of excitement — though these days, maybe that’s a good thing.

“‘Chip’ Shortage Stock No. 3: Generates HALF of its Revenue From These “Chips”

“Revenues for this firm clocked in at a whopping $456 million.”

And more quotes about capacity expansion:

“As the company’s senior vice president says, ‘We have new capacity coming on every quarter, and next summer, we have a new facility that will be up and running that will give us a capacity boost.'”

This one, sez the Thinkolator, is AVX (AVX) — that (slight mis)quote from the senior VP, Eric Pratt, appears in an article in Electronic Products about the shortages that all these companies are experiencing.

AVX looks like it has the best balance sheet in this bunch, and it pays the highest dividend (about 3%), but it’s also the most expensive on a PE basis. That broader Electronic Products article is worth reading to get a little bit of a handle on this longstanding shortage (and the fact that everyone is increasing capacity).

Here’s the basic info for the three:

And that’s about all I know after an hour or two of skimming their filings. I can’t claim to be a particular expert in the shortage that apparently still exists in the MLCC market, though it does sound interesting — some of the distributors have been posting updates and commentary about how the shortage is being rectified, and you might find those notes helpful (from Smith here, or TTI here).

This is clearly something that’s been on the minds of manufacturers, distributers and the OEMs for quite some time — which you can kind of see in the charts of these three companies over the past couple years, though certainly other things, including big picture trade war/growth issues and the chip market in general, are having an impact as well. AVX is in orange, KEMET in blue, Vishay in red… and I also threw in the S&P 500 (purple) and the Philly Semiconductor Index (green) for comparison): 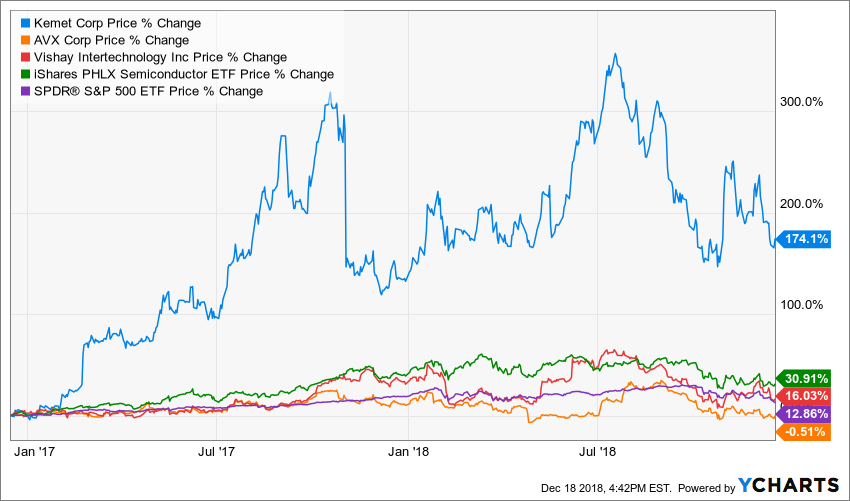 You can see that KEMET has been the wild one in this bunch, perhaps because they are so focused on just a few products in this space and the others provide a broader range of components for chips and electronic equipment… and that seems pretty exciting if you look at the two year chart, though in the interest of providing some perspective I should also show you the six month chart — this is the flip side of “exciting spikes” and a concentrated business: 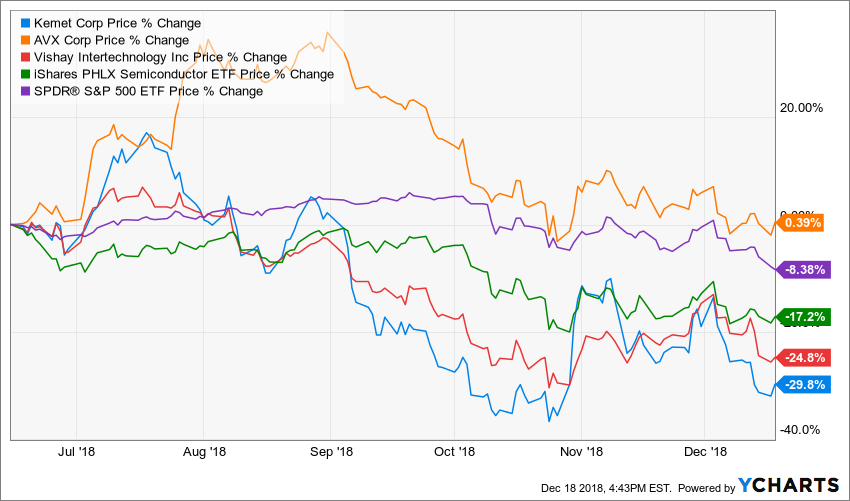 So… I can’t tell you what’s going to happen with these three stocks, but I can tell you that they’re almost certainly the three “MLCC Shortage” picks touted by Stutman’s Technology & Opportunity… and it is, at least, an interesting story.

All it lacks is your opinion… so whaddya think: Want to get in on this shortage? Think the capacity investment will drive prices down and make everyone sorry? Have any experience with these three component makers that would lead you to a bullish or bearish opinion? Let us know with a comment below.