Recent ads from Paul Mampilly say "I’ve had my eye on a secret tech company for over a year now … biding my time…" So what is it? Thinkolator answers and some analysis for you...

Today we’ve got a bit of a quickie for you, mostly just because the clues that were dropped were extremely limited… but it also happens to be a stock I’ve looked at before, so I thought it was worth taking a second look today.

Paul Mampilly over the weekend was peddling his True Momentum service (“retail” is $5,000, it was being sold for $1,995 in this promo, no refunds) with a shortish email ad, and we got these clues about the “secret” stock being teased, a recommendation to his subscribers that was supposed to go out “next week,” so it is either out now or will be out in the next couple days.

“It’s a company that’s critical to the operation of the internet.

“It serves industries as varied as aerospace, defense, banking, health care and government, to name a few.

“Its sales are growing at a rate of over 18% per year.

“And just earlier this year, it signed 599 new contracts!”

So who is it? Well, I can’t be 100% certain given those limited clues… but the Thinkolator gives us a high degree of likelihood that this is the odd little data center company Switch (SWCH).

Which, yes, did announce that they had signed 599 new contracts with customers back in their second quarter presentation (and that they brought on 34 new customers) … and also that they have had a compound annual revenue growth rate of 18.3% a year over the past five years, though that also flags some of the challenges for SWCH (that their growth rate has slowed considerably, it’s under 10% a year more recently, and that their cash flow has not actually grown as fast as their earnings so there hasn’t been an obvious benefit from increasing scale just yet).

I added Switch to my watchlist in September of 2018, after they had seriously tumbled from their late 2017 IPO, though I’ve never bought shares.

Switch (SWCH) is a new data center company that went public about two years ago. They are small, still, with four campuses either operating or planned and three large data centers in operation, and you can get an idea of the way Wall Street is currently thinking of them by looking at their stock chart compared to the five major US data centers and one European one — for what it’s worth, InterXion (INXN), the Europe-focused data center owner, and Switch (SWCH) are the only ones that aren’t structured as Real Estate Investment Trusts (REITs — pass-through investment vehicles that are designed to distribute cash flow and all taxable income as dividends and thereby avoid corporate taxes). 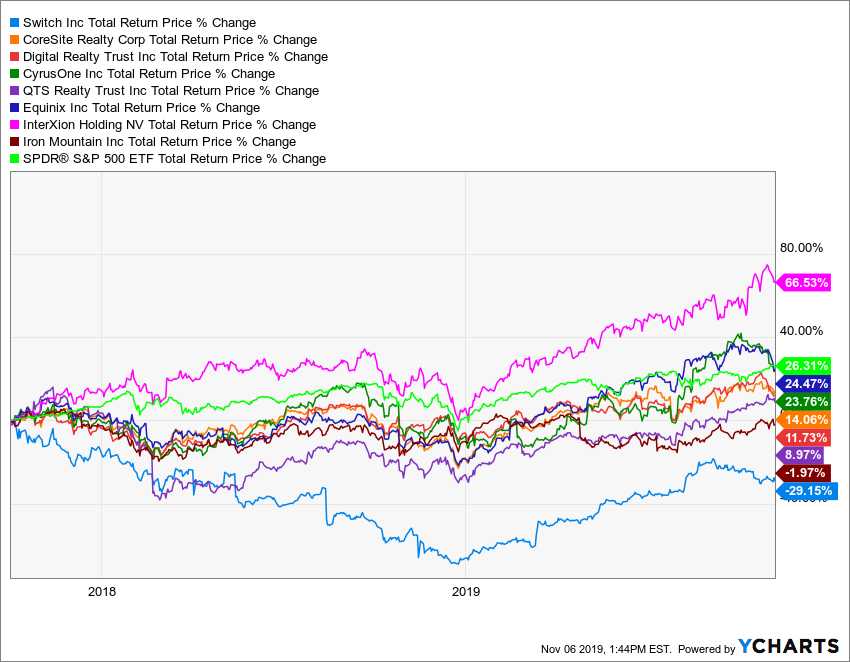 Do note that most of those data center stocks trailed the S&P 500 over the past couple years, even with the relatively high dividends that most of them pay — that’s partly because they overshot in 2016 and 2017, when most of them did far better than the market (except for QTS), so the market went into that October 2017 SWCH IPO predisposed to adore data center owners… even if this new one wasn’t actually a REIT and was at a different point in its development phase. This was one of the bigger tech IPOs of 2017, and it definitely captured the imagination of investors with a big first-day IPO pop (from a predicted $15 a share to $20 or so)… though the valuation was pretty aggressive at that IPO, at least in terms of earnings, and, as you can see, the stock has mostly trended down since.

There are obviously some challenges for Switch, particularly because this is an industry where there is a strong network effect and some benefit for operating a big network of locations — if you’re a large company and can deal with one data center provider who can get you space in a dozen different places around the country (or the world) to provide fast colocation coverage, then that may be more appealing than dealing with half a dozen different smaller providers… Switch isn’t the smallest of the data center companies, but it is among the smallest (CoreSite, which I own, and QTS are of pretty similar size), and, because they focus on this “hyperscale” idea instead of on larger numbers of colocation facilities near key internet and telecom centers, it has by far the smallest number of locations.

Still, many of the data center compa