What's being hinted at as secret recommendations of True Wealth Real Estate?

There’s been a little stirring of interest in real estate among the newsletter crowd again in recent years, most visibly with the launch of the Motley Fool’s Millionacres projects — investors are clearly interested in both publicly traded investments in the real estate space, and in “real world” real estate investments like rental properties (which also helped to create the current excitement for crowdfunding — a lot of the early private investment networks and marketplaces for small investors started out with a real estate focus).

And that’s probably a good thing — not much can beat real estate in the long term for inflation protection. Today, the big pitch I’m looking at is from Stansberry’s Steve Sjuggerud — he’s recruiting subscribers for his True Wealth Real Estate service ($2,500 for two years in this offer, no refunds).

That service appears to be brand new, but Steve Sjuggerud has been a real estate enthusiast in the past as well — I remember him pitching some more esoteric ideas like buying tax liens on the courthouse steps as the real estate market washed out after the financial crisis in 2009 and 2010, and talking up buying individual single family homes as rental properties in Florida, so the theme isn’t brand new… but it’s the first time I’ve seen him do a big promotion in a couple years, and he has a decent track record in identifying big trends in asset classes (at least in a general sense, I don’t know if his investment results always match his trend ideas), so let’s see what it is he’s pitching.

This is from the ad:

“I believe this is as good as any setup I’ve ever seen… in any sector… since I began recommending stocks more than 20 years ago.

“Better than bank warrants after the financial crisis, which led us to 700% potential gains.

“That’s why I urgently want to send you my newest research report with all the details of the stocks I just mentioned, called The No. 1 Opportunity of the 2020s: How to See 500% Gains in Housing Stocks – right away.”

I don’t know if he consistently picked great stocks or trends over the past few years, but those are real “wins” he has publicly had — I wrote about most of those ‘calls’ at the time, and yes, he did well with the China stocks in 2016, he made good biotech sector calls about a decade ago, and he did recommend those great TARP warrants when they were let loose on the market — he doesn’t get promoted as much as he did in the early days of Stansberry, I guess just because they’ve got a bigger bench now, but as I recall we covered a bunch of his teaser pitches from 2007-2012 or so. And yes, five years of writing articles is about what it took for me to consistently spell his name properly.

Much of the ad is the big-picture argument that housing, though it’s popular and some people feel like housing prices are in a “bubble” again because of the anecdotal evidence of crazy bidding for homes in some markets, is actually in the early stages of a massive growth cycle. I won’t make you suffer through the whole presentation, but here’s a little more from Sjuggerud to give you the flavor:

“Housing is popular, yes. And prices are up, no question.

“But that’s far from the whole story….

“… housing affordability is historically high. It’s been on the rise for years and remains well above the long-term average.

“One reason is that mortgage rates remain near historic lows.

“In inflation-adjusted terms, the mortgage payment on an average house is near the lowest level in 30 years.”

So his argument is that housing is not in some kind of unsustainable bubble… it’s mostly just that supply has been wildly inadequate for the rational level of demand that people have for a place to live. More from the pitch:

“And lenders are being cautious.

“So why does it look like a speculative frenzy?

“The deficit is historic. It’s been building for a decade.

“And the companies that fill it are going to make a fortune in the next few years.”

So he thinks the best homebuilders, and the important suppliers to the homebuilders, are going to continue to do very well — with “years of nearly guaranteed demand” and strong pricing power.

This sums up his big-picture argument pretty well:

“The housing fearmongers are giving us a gift.

“They’re keeping the stocks we want to own relatively cheap – for now.

“But that’s not all.

“They’re also setting up a situation not unlike GameStop.

“See, as housing continues its rise, the fearmongers are going to realize they were wrong – and that folks like us are making a killing.

“You know what happens next: Everyone’s suddenly wants to get in at once.

“Which is terrific news for folks who already own shares.

“This is the single best financial opportunity in the world today. And one of the best I’ve ever seen in 25 years.”

Which particular stocks are hinted at? Well, there’s no really aggressive tease about a single homebuilder, but several of them are shown in charts as past winners and not named, which kind of implies that he likes them well enough to keep them secret. Here’s one: 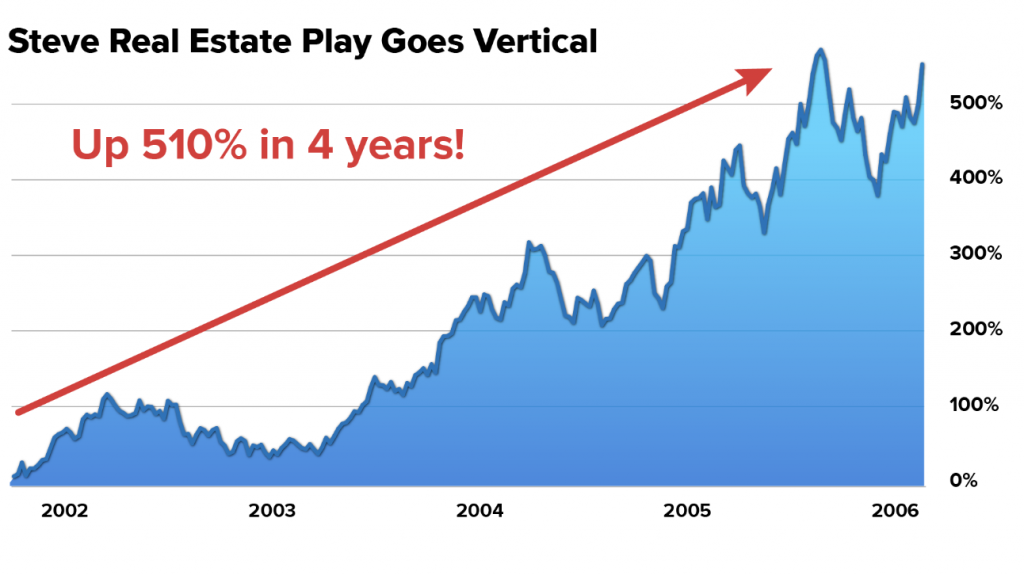 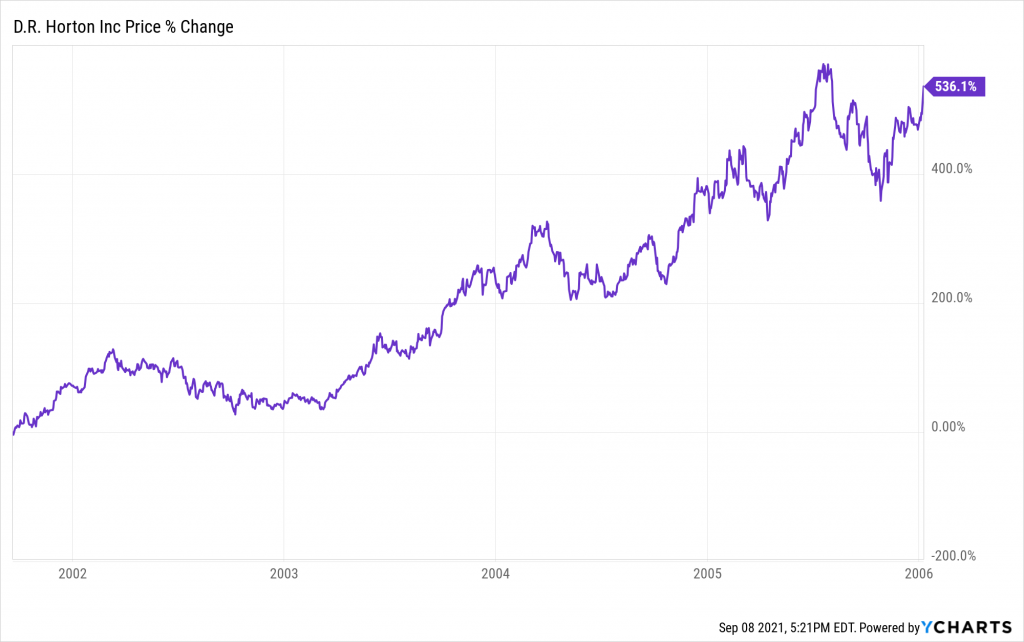 And another is hinted at…

“Keep in mind, the last time we saw a market anywhere near this good… you could