What's the Nevada gold junior hinted at by the True Wealth editor?

Apparently, Stansberry True Wealth editor Steve Sjuggerud recommended a gold stock at the Stansberry conference this week, and it was teased in the Stansberry Digest emails that a bunch of readers sent to me this morning… so that’s our quickie topic of the day. Here’s how that stock was teased to non-attendees:

“Longtime Digest readers know that Sjug’s recommendation of small-cap gold stock Seabridge Gold (SA) has sat atop the Stansberry Research Hall of Fame for the past decade. Readers who followed his advice back in July 2005 ended up booking 995% gains a little more than four years later.

“The man behind Seabridge – Albert Friedberg – is a brilliant investor with a long track record of huge returns in gold stocks. And now, Steve believes he has found Friedberg’s next big opportunity… You see, Friedberg owns a big stake in the tiny gold company Steve shared with the audience today.

“In fact, Steve is so excited about the opportunity that he flew out to Nevada early to see the company’s mine for himself. After being blown away with what he saw, Steve was excited to share the details with conference attendees…”

And we’re teased that this is a “leveraged bet on rising gold prices,” which is true of pretty much any mining stock… but that it also “hasn’t participated in the recent rally in precious metals” and trades at less than the price Friedberg paid.

So what is it? This must be Gold Standard Ventures (GSV), which I think Albert Friedberg has been invested in since at least 2011 — so he probably did pay more than the current 70-80 cents per share for some of his position, though I don’t know what his overall cost is.

Need some confirmation? Steve Sjuggerud spoke at the Stansberry Conference at 9:30 in the morning (Las Vegas time) on Monday… and GSV’s share price soared by about 10-15% at exactly that time, 12:30pm for those of us on NY time, on volume that was roughly 10X the average trading volume. The shares have come down a bit, though they’re still not back to the 75-cent range at which they were trading before Sjuggerud recommended the stock.

And it’s true, GSV has not participated in this year’s rally in gold mining stocks — I pulled just a couple random names from my portfolio to compare, so this chart shows the year-to-date price action for gold itself (GLD, green), Sandstorm Gold (SAND, red), Equinox Gold (EQX, orange) and the Junior Miners ETF (GDXJ, purple), compared to Gold Standard Ventures (GSV, blue). 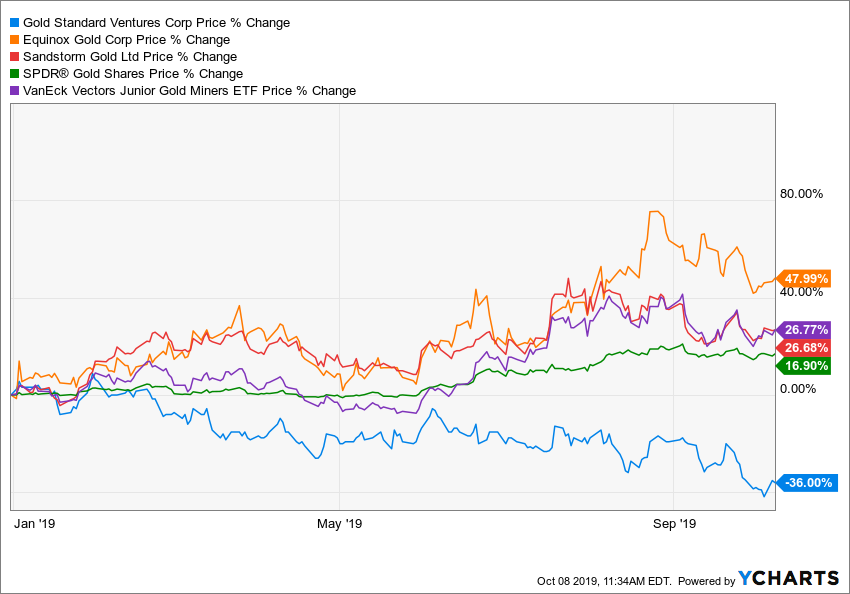 Going back 10 years might provide a little more perspective — GSV went public with its land package about a decade ago, though consolidating ownership of this “fourth dome” of the Carlin Trend had been talked about for probably at least ten years before that, and Frank Curzio teased the stock as an incredible exploration opportunity when they had identified about 150,000 ounces of gold in January of 2012, when the stock was in the 70-90 cent range… now they’ve identified 1.2 million ounces of proven and probable gold reserves (per their pre-feasibility study, at least according to their latest investor presentation), and they’ve sold a lot of stock to keep financing exploration over the past decade, but the share price is right back to that 70-90 cent range (it was about a $50 million company when Curzio teased it almost eight years ago, it’s now a $220 million company, and after the 2016 gold rally it peaked near $650 million… but exploration and land acquisition cost money, so they also went from about 50 million shares in 2012 to almost 300 million today). 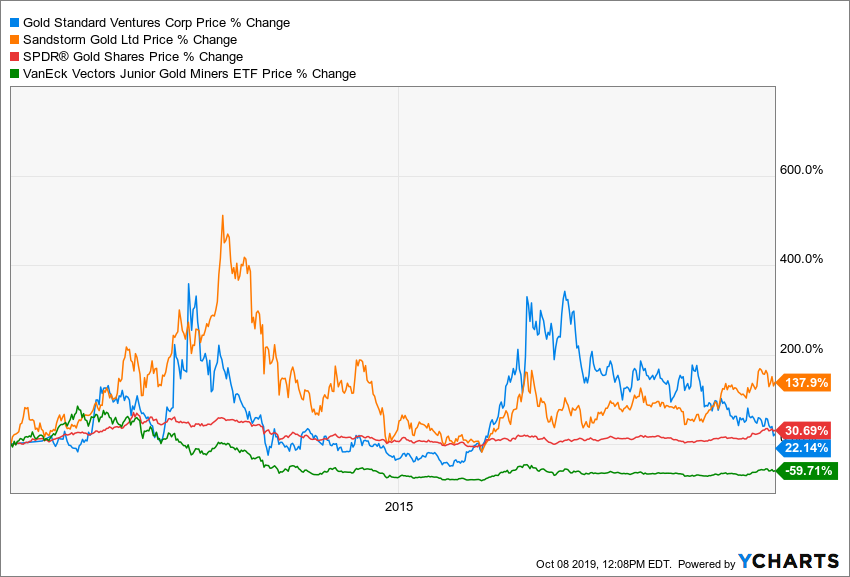 Which might represent an opportunity, if you’re as positive as Sjuggerud about the potential of GSV’s Carlin Trend projects… but it should also serve as a reminder that exploration and mine development is slow and expensive, and companies who are not yet producing gold can sometimes be even more levered to the gold price than actual producers… which was good for GSV in 2012 and 2016, at times when gold was surging, but not so good for most of the rest of the past decade.

So will this latest recovery in the gold price be good for Gold Standard Ventures? It hasn’t been yet, but as the calendar moves forward your guess is probably at least as good as mine. They’ve had plenty of good news, and good drilling results, but the stock hasn’t yet done anything… so perhaps people are just waiting for them to take that next step toward a real preliminary economic analysis or a bankable feasibility study so they can actually get moving toward financing and developing a mine, I don’t know.

Investors are not always patient with these kinds of projects, and, frankly, there’s no sign that they’re moving extra-quickly to get a mine built, so maybe they’re also holding out hope that one of the big guys will come in and partner with them for the next (expensive) phase of work. Their latest announcement about their prefeasibility study did provide some justification for building the first portion of the Railroad Project, but it also would, in their plan, require $194 million in capital to fund the project and it’s assessed at a pre-tax net present value (NPV) of only $302 million (after tax it drops to $241 million).

That’s not a bad start, but it might be too small to attract a huge partner at a premium price, and it’s definitely too small to make GSV’s current market cap of $220 million seem like a bargain based just on this first project. To be excited about Gold Standard Ventures here, you really need to read past that prefeasibility study and assume that this is just the beginning of a long period of developing this “district” of possible mines, and expanding that Railroad Project.

That’s what the company believes and is counting on, it appears, though the cynic in me notes that it wouldn’t be surprising if quite a bit more patience is required. They did just raise some money in July (about $13.5 million at 91 cents/share), so depending on the timing of their drilling plans they may not be in urgent need of funding… but they generally have burned through $5-10 million in cash each quarter, so I assume they’ll be selling more shares before we’ve gotten too far into 2020 (that fundraising combined with their existing cash balance should have put them at about $17 million in cash as of July).

Their numbers do indicate significant sensitivity to the gold price, which is no surprise — that after-tax NPV for the first phase of the Railroad Project increases from $241 million at $1,400 gold to $333 million at $1,550 gold… and drops to $147 million at $1,250 gold.

That’s just my spitballing, I haven’t followed the stock in recent years and I don’t really know what their plan is or if there are some skeletons hiding in there somewhere… but the deposit is pretty large and impressive, with pretty massive potential to expand the mine with additional drilling if you’re inclined to any optimism at all, and it clearly makes sense to build the mine with gold at $1,400 an ounce. The current PFS indicates that the company’s market capitalization already pretty fully reflects the anticipated value of this first potential mine, so a bet on GSV here is a bet not only that they’ll build this mine and it will be as profitable as anticipated, but that this first project is just the beginning and the Railroad Project will be expanded in meaningful ways over the next decade (or, of course, a bet that gold will soar far higher).

And, yes, I agree that gold is appealing and provides some