What’s Sjuggerud’s “Secret” Currency that “Could Help You Make Back Every Cent Lost In 2020 Collapse?”

What's being hinted at in the Stansberry True Wealth ads?

Steve Sjuggerud over at Stansberry has a new ad out pitching a “secret currency,” designed to entice you to subscribe to his True Wealth newsletter (that’s one of Stansberry’s “entry level” letters, currently on sale for $49/yr)… and, as usual, we’ve got plenty of questions about it — so let’s see what answers we can find for you.

Here’s the headline from the ad:

“Forget about PPP, stimulus checks, or the CARES act… this little-known currency could return 500%, with very little risk”

Not sure which investors have lost money in the “2020 collapse,” for most people who’ve stayed invested it’s been a very good year — but, of course, many of us have lost big in other areas, losing jobs or seeing loved ones taken ill, and it’s certainly possible that there will be rough sledding ahead for either the market or the economy, even with preliminary good signs from a few leading vaccine makers.

So what is this “secret currency?” More from the pitch:

“… while tens of millions of Americans pray the government will issue yet another round of stimulus checks… only a tiny percentage of the country realizes there’s a second, ‘secret’ way to supplement your income.

“One that can rapidly grow your wealth over the coming years, with very little risk.”

Whatever could it be? Apparently it’s quite official, and it’s not some kind of newfangled cryptocurrency token…

“… it’s a little-known investment issued by the U.S. government, which has a history of growing your money in a safe, secure way – without touching stocks, bonds, or cryptocurrencies.”

“The Morse family from New York made millions when their medical device company was bought by Pfizer. They are part-owners of the Boston Red Sox and they’ve hoarded as much as $19 million.

“The Brand family, who made their money brewing beer in Chicago, put a lot of their profits into this type of investment and it grew to a portfolio worth more than $10 million.

“Even actors, athletes, and singers are investing in this market. I found evidence suggesting that Matthew McConaughey, Joan Crawford, Kate Hudson, Paul McCartney, Wayne Gretzky, and Kareem Abdul-Jabbar are all reportedly using variations of it.”

That’s a motley bunch, but the Morse and Brand families are decent clues.

And apparently this “secret currency” did well earlier this year”

“In the first half of this year, while the Dow plunged 9.5%… this little-known investment handed investors returns of as much as 22%….

And we’re told that the story started back in 1971, ‘behind closed doors’ at Camp David… so really, that’s all we need to know: this is yet another pitch about gold.

And if it’s a pitch about gold, and it’s also a “secret currency” that’s issued by the U.S. Government, then that means we’re talking about gold coins.

This is not exactly a leap of faith on my part, I must confess — Steve Sjuggerud has pitched “gold coins” as an investment idea many times in the past 20 years, most often touting specific varieties of older gold and silver coins that have some collectible value in addition to their melt value.

“And every day, thousands of people walk past these unobtrusive government buildings, never knowing that one of history’s greatest wealth-building strategies ever is hidden behind these windowless walls.”

Here’s the photo that Sjuggerud’s ad uses, without the words scrubbed off: 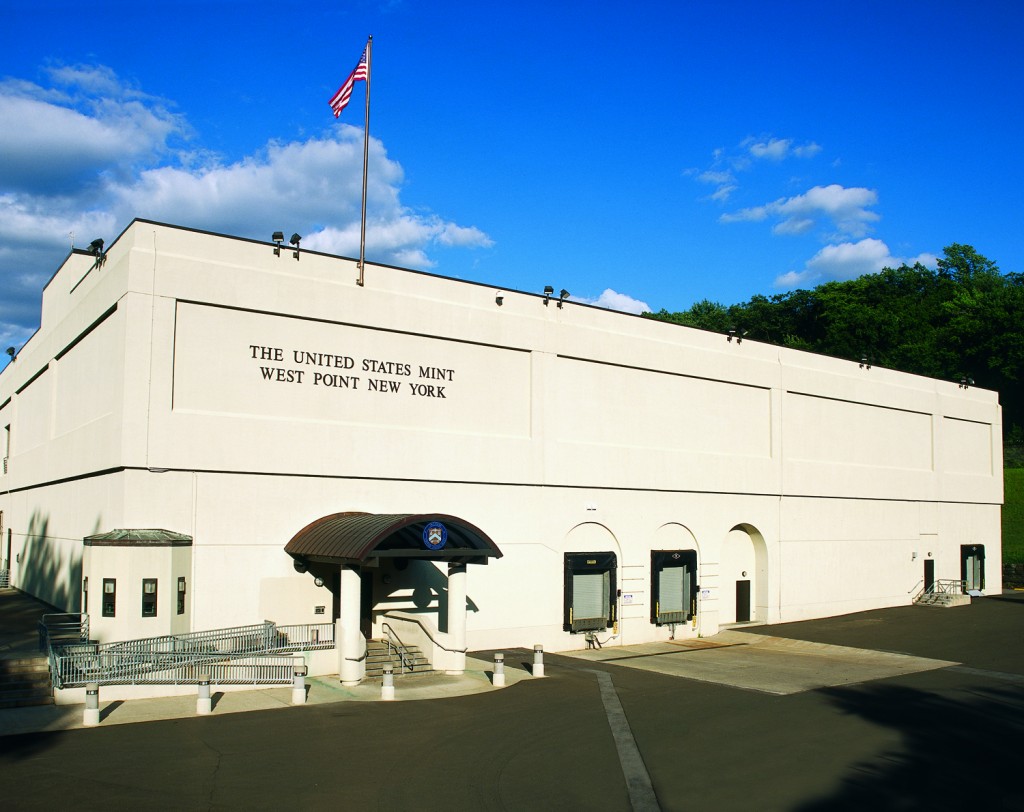 There are still several Mints around the US, but the one at West Point is best known for churning out American Eagle gold and silver coins and other non-circulating coins and commemoratives.

We’ll see if we can ID which coins he’s talking about, but let’s get a little more context from the ad first:

“There’s never been a better time to invest in this second U.S. Gov’t Currency than right now

“You see, it thrives in times of economic uncertainty.

“And, there’s only been a handful of times the buying opportunity was THIS attractive.”

And he makes the oft-heard inflation argument about the value of gold, which generally holds true in the long run (gold proctects purchasing power) but doesn’t always hold true in the short run (gold is like anything else, supply