What's being teased for the new Wealth Eruption newsletter?

I’ve gotten several messages from Australia over the past few days about a promo that’s headlined “The Everything App”, and it does catch the eye… not least because they’re talking up a five-cent company that they think will be over a dollar by the end of the year, and that may surge as soon as July.

So what gives? Let’s dig in and get you some answers…

The ad comes from a fellow named Härje Ronngard, who has recently started a newsletter called Wealth Eruption — it looks like this is the latest “entry level” newsletter from Port Phillip Publishing, which is an Agora affiliate in Australia and uses the same aggressive copywriting hype that we’re familiar with from Agora affiliates (and so many others) in the US.

And the main focus of the ad is that if you subscribe, he’ll send you his special report, ‘The Age of the “Everything App”: The 5-cent ASX Tech Marvel That Could Payout 20 Times Your Money.’

“Amazon made it convenient for anyone to shop online.

“All you need to do is push that little yellow button.

“The Everything App has taken Amazon’s idea and kicked it up to a whole new level.

“It centralises all your favourite apps in one place.

“It’s like a combination of iTunes, Amazon, PayPal and AirBNB ON STEROIDS.”

OK, that sounds like a lovely idea… though hardly believable as a market force if it’s a small player, not even in the somewhat isolated Australian market. What else?

“Before July a radical online breakthrough, Bloomberg calls a: ‘revolution’…

“Is primed to connect one BILLION people and kick-start a potential $36 trillion windfall for early backers.

That “July” bit is about China and 5G — so this is where we learn that this isn’t really an Australian company, it’s a Chinese company… though yes, it is listed in Australia. 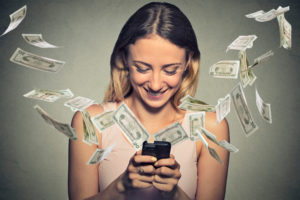 That “revolution” quote from Bloomberg is just about 5G in general, and about the huge difference it will make in extending internet access to more people around the world, at higher speeds — and while China is no slouch in internet penetration, there are certainly a lot of lower-income and rural Chinese who do not have internet access.

That’s not going to change with the flip of a switch in July, so that’s clearly a made-up catalyst designed to get us to believe there’s an urgent need to sign up for a newsletter immediately. Yes, China is planning to implement 5G quickly, and to roll out commercial products as fast as they can to try to establish some leadership, but that doesn’t mean you’re going to see the 40%+ of Chinese who don’t have Internet access all getting online by the end of the year — most likely, the penetration will continue to be relatively gradual, growing 5-10% per year as it has been, as costs go down and quality goes up.

5G is expected to have its first official standards released this Summer, so there is some reality to that timeline — and China has been pushing companies to develop “pre-commercial” products so that they’re ready to be among the first to release 5G products once the international community agrees on technical standards… but presumably all the big wireless infrastructure and device companies are thinking along the same lines. No one is trying to be slow, or to be last.

What, then, is this company? We’re told that this “Everything App” is already in demand from a lot of huge partners in China, though the specifics aren’t that clear…

“Nine of the world&